At KOR Energy, the Rooftop Solar Panel systems are generally of three types:

The basic fact that should be remembered when integrating a Solar system with diesel generator is – the more load supported by the solar plant, the less will be load on diesel generator.

While you are installing a rooftop solar photovoltaic system, the cost of any such system will depend upon two factors. The first factor being the function it is serving which includes either the system is supplying the power to the grid or supporting the load during any power failure. Second factor remains the incentives that are available. Typical components of any rooftop PV System include PV Modules, inverters, cables. For a 1kwp system, the typical cost breakup will be like 52% for the modules, 23% for inverters, 17% for cables and some 8% for the installation. It should be noted that here battery backup has not been taken into consideration as it adds to cost of initial investment, maintenance, replacement.

The other factors that can affect the cost of such a system are the brand of the product and if meets any standard. The systems we offer at KOR Energy India Pvt. Ltd.  are manufactured by tier 1 manufactures and are likely to be more expensive because our sourced products have been certified or meet some standards then also they are likely to be expensive. Price of such system may or may not vary depending upon the warranty it is offering.

Speaking about the incentives, several types of incentives are worldwide available for these systems. However, these incentives vary from one nation to other nation. The incentives for such systems are majorly classified into following:

Rooftop Solar PV Systems are fairly heavy. Depending upon the capacity, the inverters and batteries can be very heavy. Thus, a concrete rooftop is essentially required to support such systems.

If you need a Demo for a rooftop solar system or want to speak to our representative, feel free to speak to us at 91-9999555823 or write to sushil@korenergy.in 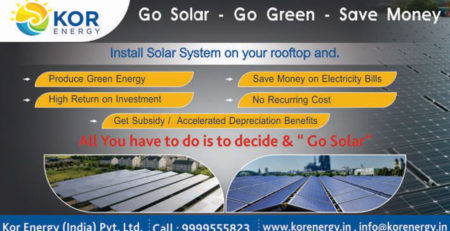 Solar Panel Care Post Installation Very often it is being seen that we find it difficult to get accustomed... read more